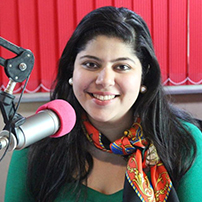 Stutee Ghosh is an award winning RJ having won the prestigious India Radio Forum Best RJ Award. She started off while she was still doing her Post Graduation in English Literature at Delhi University. She forayed into film reviews and criticism and has been associated with TV and the Digital medium as well. Born and brought up in Delhi she is an RJ with Fever 104 fm where she hosts the morning show. She is also a Film critic and Political satirist with The Quint and a Celeb Chatshow host with Hindustan Times Digital. Her alter ego Pammi Kaur is equally popular as she lays threadbare political and social happenings with her characteristic persona.

Stutee is known for her ready wit, quick repartees, humor and disarming charm that has also earned her the sobriquet of “Superwomaniya Stutee” .She has an endearing style that puts the other person instantly at ease and forthcoming with their candid responses. Well grounded in political matters she has been on various TV channels on a regular basis discussing political and social issues.