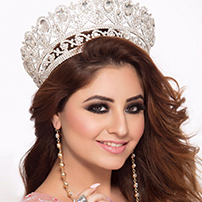 Srishti Kaur, the winner of Teen Universe 2017. Hailing from Noida, Ms. Srishti Kaur, Teen Universe India 2017 won the overall crown at the contest becoming the first Indian and the first teenager to win an international teen crown for India. She has done fashion studies from the London College of Fashion. Besides winning the main crown, Ms. Srishti Kaur also managed to bag the traditional fashion awards of Best Traditional Haute Couture and Best National Costume which was designed by Mr. Melvyn Noronha. During the contest Ms. Srishti Kaur, took the best of the fashion and textile industry of India wearing garments by some of the best designers in the country including Rocky Star, Mandira Wirk, Komal Sood, Swapnil Shinde, Rippii Sethi, Reynu Tandon, Nalanda Bhandari, Aditi Gupta, Anjana Mishra and Rajat Tangri. Besides the designers, Ms. Kaur also prepared for the contest with some of the best pageant trainers in the country, namely Mrs. Rita Gangwani, Mr. Melvyn Noronha, Mr. Devashish Majumdar and Ms. Akanksha Manchanda. With this preparation, taking the best of India and bringing glory to the name of the nation was made possible, and your support and blessings upon these achievements through a small meet would encourage the youth to further represent India with their best abilities at International platforms. Besides the achievements, Ms. Srishti Kaur has actively become the face to raise the awareness towards Cancer Prevention. She is current Ambassador of Indian cancer society & she carries out campaigns all over India side by side with the revered Prime Minister of India Mr. Narender Modi. Tree planting campaigns were organized in order to support the Swacch Bharat Abhiyan. She also supports a school for the financially underprivileged by the name Apna Ghar. In support of the “MAKE IN INDIA” campaign she had launched her own brand of fashion accessories under the brand name of “ELIFEROUS” in India’s Beach Fashion Week. She has also been involved in providing funding and aid to the blind institutions. With all these compassionate acts of kindness, Ms. Srishti intends to continue serving as an example to the world a young Indian woman of today can do, under your excellent leadership. She had also privileged to have been awarded “THE HINDUSTAN TIMES YOUTH AWARD 2017” in Chandigarh. In addition to this “The Fashion award 2017” from JD Institute of fashion Technology & the International women’s film forum AAFT by Mr. Sandeep Marwah, Nex Brands Brand Vison Award for ‘the Extraordinaire’ Youngest Achiever 2018.