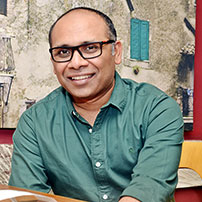 Sriram is the founder of the award winning NGO, Nalandaway foundation which helps disadvantaged children realise their dreams through the power of arts. He recently co-founded “Wandering Artist,” Chennai’s new hip art and culture hub, which India Today magazine called it as “one of the top five creative spaces to watch out for in India”. Named by the Outlook Business magazine as one of the top 50 social entrepreneurs in India, he has received numerous awards, including the World Bank’s development marketplace award, “Architect of the future”
by Waldzell Institute, Ashoka Fellowship and more recently the Millennium Award for Innovation in Education instituted by USAID, FICCI and Govt. of India. Sriram was also selected for the “Artists for Good” Fellowship by the Singapore International Foundation.

He is also the author of the much acclaimed novel “The Story of a Suicide.”