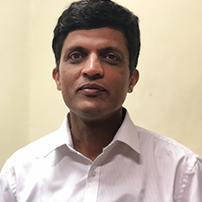 Srinivas is an Innovator, Entrepreneur. His passion for nature, environment and sustainability has driven him to innovate on energy management. He is the inventor of Intelligent Power Management suite of Software which has enabled fortune 500 companies to save over 1100 Giga Watt hours of energy till date. He has multiple patents in energy management.

Srinivas has a master’s degree in computer science from IIT Bombay and over 26+ years of experience in the IT industry.

Currently he is the founder and CEO for VIGYANLABS a startup engaged in Innovation in Energy Management. He also serves on the governing board of CCICI (ccici.in).

He served as a Principal Architect for the Aadhaar program of UIDAI.

Prior to that he worked as a Chief Architect at Perot Systems Bangalore where he was responsible for technology strategy, managing the technology centers of excellence. He also served as master Architect at Hewlett Packard. >

Subsequent to his Master’s degree at IIT Bombay, he spent an year at IITB as a project engineer where he developed popular open source products (YAPCBR- Yet Another PC Bridge) and IPXWatch (an IPX Protocol Analyzer).

Srinivas speaks often at various industry/academic forums and events. His other interests include astronomy, Ayurveda and alternative medicine.