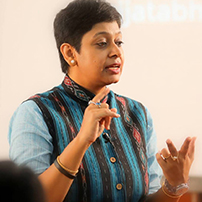 Srijata is an Inspirational Speaker and Entrepreneur from Bangalore. Currently, she runs two diverse businesses, balancing her role as a speaker and an entrepreneur.

The journey of more than 2 decades began at the age of 15 for her, when she voiced her opinion for the first time. She came from a very small town in West Bengal, India where it was unheard of sending young girls to hostel until then. And, she wanted to move to Kolkata for studies and living on my own… Independence was on her mind!

That same passion for independence took her from Kolkata to Chennai to Bangalore, giving mini heart attacks to her relatives and closed ones.

Though she currently lives in Bangalore, she avoids calling herself settled… she hates the word “settle”; she believes it stops us from dreaming and achieving ambitious goals, making us stagnant eventually.

She has more than 15 years of industry experience. Having worked for companies like ESPN, Consim Group etc. for a decade she felt, she had enough. That’s when she took a plunge into entrepreneurship in 2013, since then she has established multiple startups, closed down a startup, fallen, failed, yet learned to get up again and again… the journey has been like a fairy tale… a special kind of a fairy tale!