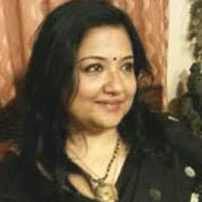 Srabanee Chakraborty Born in Kolkata, Srabanee had spent her formative years in Bhopal, Madhya Pradesh. After coming back to Kolkata Srabanee went to Patha Bhavan, her Alma Mater that has played a significant role in honing her creative skills. She completeled her masters in English Literature, from the University of Kolkata, and B.Ed followed by an M.B.A. She has been trained in Classical music from the tender age of six and had later been an artiste on All India Radio Station, Kolkata. Life was not always a smooth ride for Srabanee as she has had her share of hardships as well. However, her firm belief in the power of perseverance and positivity did not deter her spirits. In the year 1991 Srabanee was rendered partially paralytic by a sudden viral attack. Within a few years, she rejected crutches and wheel chairs and got back on her feet. With sheer will power and determination, she overcame this challenge and finally went on to become the gritty entrepreneur that she is today. She started her career with a corporate house in sales and made a special mark by introducing creativity in sales. Thereafter driven by her passion to build her own business, the entrepreneur streak in her, made her give up the job and start a venture of her own. She has been in the field of Creative Marketing, Brand Development and BTL ideation and activation and has conceptualized and handled more than 1200 major ground events over the last decade. Srabanee has been instrumental in scouting and identifying musical talents from across States in India and garner participation for various musical reality shows like “Zee TV Sa Ga Ma Pa”, Antakshari, “Raw Star” in Star Plus, “Chak De Bacche” in 9X and “Sur-Shketra” in Colours. She has also been an online producer in shows like “Voice of India”, “Chote Ustad” in Star Plus. In 2006 she was the primary consultant to launch Zee Bangla Sa Re Ga Ma Pa. Having specialised in Televised Reality shows she was also the Music Consultant for ETV’ Bangla’s musical show, “Gaane Mor Indradhanu” and has been Creative Head and Associate Producer for “Royal Bengal Superstar” on Star Jalsha. She started working as an assistant director and reality director in 2007 and started working as a Producer and Director in several Ad /Corporate films. Having fought such serious physical challenges and emerged as an entrepreneur, today, Srabanee has not only successfully made her mark within the entertainment industry but also runs a company which is a sole dealer of Lewis Berger Home decor and has reached a commendable turnover. Srabanee truly represents the modern Indian woman in all its glory. She stands as a role model for many such young women who, just like her, have great aspirations and are not willing to give up due to any physical / mental or social challenge.