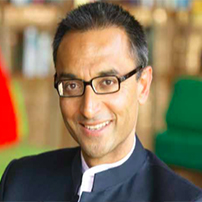 Sonu Shivdasani (born 1965) is an Indian- British hotelier, who is the founder and CEO of Soneva Group which owns the luxury resorts Soneva Fushi and Soneva Jani in the Maldives, Soneva Kiri in Thailand, and Soneva in Aqua(a two-cabin luxury yacht that sails from Soneva Fushi.) He is also the founder and former CEO of the Six Senses Resorts & Spas, across South East Asia and Europe, which he sold in 2012.