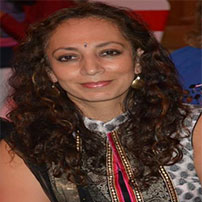 Sonia Andhi (Bilkhu) is a social worker, radio and television broadcaster, researcher, community activist and the founder of the Shakti Awards and Shakti Society. She holds a Bachelor of Arts from Himachal Pradesh University, Bachelor of Social Work with distinction from the University of Victoria and Master of Social Work from the University of British Columbia. She is fluent in Hindi, English, Punjabi and Urdu.

Sonia was born in the hills of Simla, India and emigrated to Canada in 1987. She has lived in Surrey since but travelled around the world to explore different lifestyles and cultures. She produced a lifestyle television show called Hamaara Andaaz that showcased the culture and spirituality of various countries and communities. She has been hosting various radio shows since her teenage years where she started her broadcasting journey with All India Radio’s ‘Yuv Vani’ program.

Always a strong advocate for human rights and women’s issues, Sonia has worked with several women’s organizations in Greater Vancouver and now is the Executive Director of Shakti Society, a non profit organization that believes in empowering women, families and children to create a safer and healthier world. She founded the Shakti Awards in 2000 in honour of International Women’s Day and to recognize women’s achievements in various fields. Since their inception, over 120 women from all walks of life have been given the Shakti Award for their accomplishments.

Under the leadership of Sonia, Shakti Society has organized several events to engage, empower and create awareness on issues like violence against, women, bullying, mental, physical and spiritual health as well as community connections through a monthly women’s Shakti luncheon.