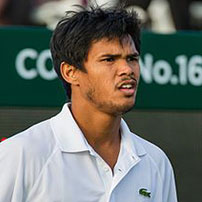 Somdev Kishore Devvarman is a former professional Indian tennis player. He hit the headlines for being the only collegiate player to have made three consecutive finals at the NCAA, winning back-to-back finals in his junior and senior years at the University of Virginia. Only three other players have matched that record since 1950. His 44–1 win-loss record in 2008 at the NCAA Men’s Tennis Championship is unprecedented.
His best achievement on the ATP World Tour was reaching the final of the Chennai Open in 2009, as a wild card entry. In 2010, Somdev won the gold medal in the men’s singles event of XIXth Commonwealth Games at the R.K. Khanna Tennis Stadium in New Delhi, and he followed it up with both men’s singles and doubles gold in the 2010 Asian Games in Guangzhou, China. He was coached by Scott McCain.
In 2011, Devvarman received the Arjuna Award from the Indian government for his tennis successes. In March 2017, the Ministry of Youth Affairs and Sports, Government of India, appointed him as the national observer for tennis. In 2018, he was awarded with the civilian award Padma Shri.