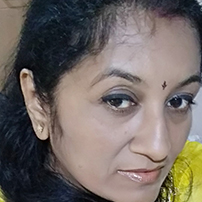 Based in Madurai now, Soma is a Features Writer with The Hindu, India’s leading English national daily. She writes on a gamut of subjects from lifestyle, food and travel to health, environment and social issues. Her human interest stories and interview-based personality interviews are a huge hit in the MetroPlus section of the paper.
Previously she was in the political bureau of The Hindu in New Delhi, the city of her birth. She did her graduation from Delhi University, post-graduation from Jamia Millia University and courses in Journalism from Indian Institute of Mass Communication, Delhi, and Cardiff University, UK.
Soma is a recipient of several national and regional awards particularly for her writings on health issues. She broke several health investigative stories as a young reporter. Soma is a recipient of several fellowships that enabled her to study, travel extensively and file stories from all over India and overseas including Australia, USA, Germany, UK and Thailand.
Soma has been a member of the drafting committee for the national literacy policy in the 90s and is a life member of South Asian Federation of Envrionment Journalists. She has accompanied several politicians on their election trails. After shifting to South India, her writings in the weekly column Road Less Travelled became very popular. from 2003 to 2008, she hit the lesser known paths and unearthed more than 100 hidden spots worth visiting in Tamil Nadu and neighbouring Southern States. Her other popular column called Making a Difference ran for a record seven years from 2009-2016 highlighting ordinary people with extraordinary achievements or talents or those who fought every odd to help others.
Human interest stories appeal to Soma and she likes to go behind every story to bring out the hitherto unknown facts. She now writes for different sections of The Hindu. With a nose for news and a penchant for delving deep, Soma feels though political journalism rules the roost, it is development journalism that needs to be patronized. Her body of work at The Hindu over the last two decades has enabled her to be the voice of the voiceless.