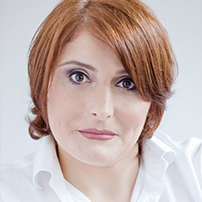 Snezana Zivcevska-Stalpers is Macedonian by origin but currently based in Amsterdam, The Netherlands. She is a Project Manager Technology and Innovation at IBM, managing projects is the area of advanced technologies like Watson Analytics and Cloud Computing. Next to that she is an advocate and a big promoter of gender equality in IT and STEAM (Science, Technology, Engineering, Art and Math). She is a founder of the Women’s Professional Empowerment Initiative – Amsterdam, mentor of young women who want to build a successful career in IT, but also she is an active member of the initiatives such as UN Women – EmpowerWomen, Women in Tech, and TEDxAmsterdamWomen.
Snezana is the winner of the Impact Award 2016 of the renown Dutch female magazine Opzij in the category ‘Women who influence the society from their formal position, but also women who break the informal boundaries by using their knowledge, experience, time and capabilities to influence.’