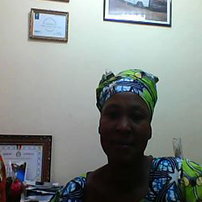 At the social level :-The social organization is of a traditional type where the woman takes care of the household, the care and the maintenance of the children, helps the husband in the field works, excision is still widespread. Women do not participate in decision-making in the family, they work 17 to 20 hours a day depending on the period.As for the men they take care of the rustic works, are responsible for the family breadbasket and in the decision making. Owner of the recipe from the sale of the crops.
Image of the real woman :- The image of a real woman is that of a housewife with children for whom she is devoted, a woman who contributes to family expenses.
The wife is perceived as being nothing without her complete submission to her husband, this ideology seems to help curb women’s economic, political and social initiatives.
Economic role of women :- In the exercise of different economic activities, women play a leading role. However, they do not have enough income to support themselves and their children.
cultural :- At the cultural level, the family organization is patrilineal or the birthright automatically confers authority on the eldest even if it does not have the material or intellectual capacity to meet family management costs.
The girl is a source of income for her parents, which is why early marriages are common. The wife is at the same time a family labor force for her husband that produces labor through close births.
Policy :- Politically, women do not participate much in political activities. The level of women’s participation in decision-making is very low in the governing body of their community.
The persistence of sociocultural constraints influences in one way or another all areas of the economic, political and social life of women.
Organizational :-Rural women are not structured enough, organized and strong enough to be heard by policy makers and the public. There is also a shortage of information and communication programs for rural women. All the information is focused on urban women, in a word, literate women. The consideration of the rural woman in the media space comes down to celebrations, political campaigns, official visits, etc.
The concept of femininity :- The concept of femininity is perceived according to the secular social burdens that exist in Mali. Women have the same attitudes and behaviors related to tradition.
Specific problems :-The specific problems are the fight against food insecurity and the economic advancement of women.
Promoting the economic rights of women is the major problem. The lack of recognition of women’s economic rights manifests itself in several ways. First, there is the illiteracy of communities in general and women in particular, the lack of information and the influence of certain cultural beliefs and practices. religious and ethnic groups not favorable to women.
Unequal access to productive assets such as land is a situation that aggravates the precarious situation of women, they are not landowners. They exploit plots of land that men want to put at their disposal.
Few are able to cope with household burdens due to socially agreed rules (women are responsible for finding the condiments to add to meal preparation, they are responsible for the preparation of meals). maintenance and schooling of children). Perspectives
Today, the country has important legislative and regulatory instruments for the advancement of women and children, such as the national policy for the advancement of women.
Through these different legislative and regulatory mechanisms, he is very happy to see a marked improvement in the status of women and the participation of women in positions of responsibility at legislative, executive and judicial levels.
Thanks to these different policies for the advancement of women, many negative prejudices about women in Mali are in sharp decline and women are increasingly at the center of the fight against poverty and the overall development of the country. However, in rural areas the decor is different. Most women are illiterate and unaware of their capacity and the leading role they play in the country’s development.
The leadership of rural women is not recognized and their leading role in local development is invisible which is a prejudice that can affect the productivity of women with no decision-making power.