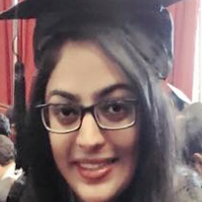 While pursuing Economics Honours from St. Stephen’s College, Simran found herself extremely engaged and rewarded in being able to step out of her comfort zone to change the things we incessantly complain about India’s policy landscape. Being awarded two undergraduate primary-research fellowships out of more than 100 students in the sectors of Water, Sanitation and Hygiene, Digital Technology and Financial Inclusion, the biggest success, she believes she was fortunate to achieve, was contributing towards the education of underprivileged and marginalised sections through research and awareness initiatives. Upon graduation, she set off on a path to further engage with her passion to study development economics and that steered her to
pursue Masters in Public Policy (MPP) from St. Xavier’s College (Autonomous), Mumbai, focusing on the intersection of development theory and behavioural economics to innovate effective policy solutions for the challenges facing developing countries. She was a part of the ‘11th Annual International G-20 Conference’ on “Global Cooperation for Inclusive Growth: Views from G-20 Countries” during her internship with the Ministry of External Affairs (MEA) under the Multilateral Economic Relations (MER) Division this summer and analysed the economic and political relations between G-20, BRICS and India. While interning with the Research Division of the Centre for Civil Society (CCS), she conducted primary research and prepared a case study on the implementation of the ‘Street Vendors (Protection of Livelihood and Regulation of Street Vending) Act, 2014’ in Mumbai. Simran’s final year dissertation is also based on the theme of ‘Informal Economy and Decent Work’, wherein she is trying to examine the economic, social and power relations surrounding Street Vendors, their representative bodies and the local government within the broader debates of urban politics and development. On the occasion of the 150th Birth Anniversary of Mahatma Gandhi and 110th Death Anniversary of Leo Tolstoy in November 2019 and to emphasize the relevance of their ideas and philosophy in modern context for future generations, Simran had been invited as one of the honoured panelists with speakers from Russia, Poland and Germany. Her research paper on “Gandhian and Tolstoyan Philosophy: Humanistic Approach to Education” was selected for presentation at the International Conference titled ‘Tolstoy to Gandhi: A Philosophical Journey’ organised by the Gandhi Bhawan, University of Delhi in collaboration with the Embassy of the Russian Federation in New Delhi and Leo-Tolstoy Estate Museum ‘Yasnaya Polyana’, Russia. To disseminate the latest developments in research on suicide prevention and mental healthcare awareness in India, Simran’s research paper on “Suicide: A Silent Preventable Epidemic” was selected for presentation and
she was invited as one of the six honoured speakers at the ‘5th Annual World Suicide Prevention Day Conference 2019’ organised by Sisters Living Works, a Non-Profit Organisation. She has a keen interest in the field of International and Development Economics to explore the nuances of Public Policy and redress development issues through evidence-based policy interventions. Simran’s essay on ‘Encoding Privacy in the Digital World’ won the first prize in the Indian Liberals Essay Contest 2019, hosted by the Centre for Civil Society in partnership with Friedrich Naumann Foundation for Freedom, Germany. Recently, she had been invited as a Panelist for the 8th FORE International Conference on Frugal approach to Innovation (FICFAI) 2019 hosted in December by the FORE School of Management, New Delhi. Her research paper on ‘Adopting Frugal Innovation in Education: Inclusive Technology for Social Development’ derived inspiration from E.F. Schumacher’s book ‘Small is Beautiful: Economics as if People Mattered’. Thus, Simran is of the opinion that reality is what people make of it, more or less on the lines of Alexander Wendt. Her reality is about creating a shared space where people, diplomacy, economics and international realities can merge together to provide for an atmosphere of peaceful co-existence. She has been surviving on Amartya Sen,
Fukoyama and Karl Marx not only for the sheer joy of critiquing, analysing and learning their works but to see how economics and developmental policies could work in tandem.