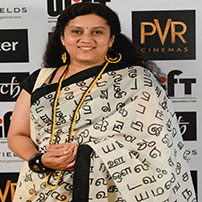 Shylaja Chetlur is popular media artist working across television, theatre & films, both as a performer & content creator. She is an actor, film maker & entrepreneur earnestly bonded to the development of fine arts & culture – theatrical & visual.
Shylaja, Partners a Media Production House – SHYLAAR PRODUCTIONS that produces corporate film, docus, designs publicity around events etc. She is the Founder & Managing Trustee of – CINEMA RENDEZVOUS a trust that runs a film club show casing & discussing World Cinemas of substance to promote cross cultural understanding.The trust also creates awareness about Cinema as a social tool & works towards the betterment of unsung cinema professionals from the more .
She is the proprietress of WANDERLUST the travel lounge in Hotel Savera that works on promoting Chennai & beyond in all its glory. As an actor her performances on TV shows, advertistments & stage shows have fetched her a recognition that she puts to good use in other spheres of her interests. Rudraveenai, Sahana, Lakshmi, Selvi, Cinema Karam Coffee etc are some projects on TV that brought her distinct smile & voice into the households. Enthiran was a cameo in the big screen while numerous advertisement over the years have all made her an instantly recognisable celebrity across different sections of audiences. She is a core committee member for the Chennai International Film Festival. As the Indian Associate she conceives & executes an Annual Show called The Taste of India in Melbourne exploring Australian milieu in the context of Indian classical / fusion music, dance, theatre and visual arts. She co-promoted a contemporary art gallery – Art & Soul promoting visual artists from 2010- 2013. Shylaja hosted a radio show called Women Talk in Chennailive. She works with two NGOs The Duchess Helping Hands & NAAM, both of which work for women- school girls & single women respectively.
Endowed with entrepreneurship Shylaja has a contagious enthusiasm and passion that leave a qualitative mark on all that she carefully chooses to pursue whether in media, social work or the arts.