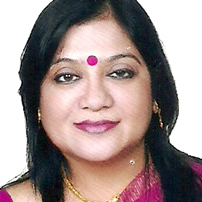 An alumnus of Modern High School and the erstwhile Presidency College, Calcutta, Shyamashree Sen received first class and ranked first from Calcutta University in both her Bachelor’s and Master’s Degree Examinations in Political Science.

Shyamashreee began her career as a copywriter with a couple of advertising agencies and freelanced for both Bengali and English dailies in Kolkata, edited a youth oriented magazine, Just Now for a while before launching her own children’s publishing house Colour Me Green with her friend in 1999. Later, she was associated with Kolkata on Wheels magazine. She partners in a public relations company, Connections which handles the corporate profiles of many famous business houses, celebrities and trade associations. She manages Nimble Fingers, an NGO that showcases crafts and craftsmen of Bengal as she believes is to uplift the artisans of Bengal and popularize their crafts. She has a critically acclaimed book of poems, Stolen Moments to her credit and contributes regularly to journals and magazines.

Involved in a varied social activities, she is associated with many organizations.She is Association Representative of University Women’s Association of Calcutta and served as Hon. Secretary of the Indian Federation of University Women’s Associations. She is a Life Member of National Indian Association of Women, Saroj Nalini Dutta Memorial Association and The Thalassaemia Society of India. She was the first lady President of the Eastern Chamber of Commerce. She is also a member of Ananya Onnomon, a socio cultural organisation. An active Rotarian for the past 23 years, she is the serving District Governor of Rotary International District 3291. She has won a large number of awards and recognitions from Rotary and during her year of service, her emphasis has been on women empowerment, opening of vocational centres for underprivileged women, health care for marginalized women and children, spreading literacy to those adults who have never gone to school and sending back school drop outs to school, spreading awareness of diseases like Thalassaemia, HIV/AIDS, Polio eradication and organizing eye surgeries for the underprivileged.

Shyamashree is married to Rtn Capt Sunand Sen, a Master Mariner. Their daughter Sunrita is studying for a post graduate degree in Law in USA and their son Sumit is working in New Delhi.