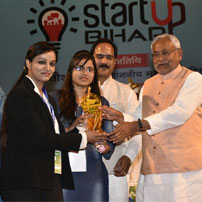 Shweta Singh ( Co -Founder,GST Suvidha ) Chartered Accountant Worked with Big 4
She is born and brought up in Patna, capital of Bihar. She did her schooling form one of the renowned School of Bihar, ST, Xavier’s High, School. The School environment helped her to be an all rounder, and excel in multiple f ields.She was an active participant in cultural activities, sports, social communities like LTS & Spic­ macay.Apart from academics, online gaming use to amuse her. She even participated in various gaming contest on a world level like World Champaign Games, and was awarded there.Since Childhood her swimming skill were extra-ordinary.She learned classical dance and has been certif ied in Kathak.She did her 12th from St, Joseph’s Convent high School from ISC board in Commerce, which is again among the top notch schools in Patna.There after her interests got indulged in Finance & She wanted to be an Expert in that, thereafter she pursued Chartered Accountancy which is considered as one of the most specialised course in Finance. Along with her Chartered accountancy course she was doing Bachelor in Commerce from Patna Women’s College. She was Class representative, and had the skill to manage more 300 girls in a class & looking after other aspects of college. After graduating from College, she went to Delhi to start with her articleship. She did her articleship form Jindal Sharda & Associates, which was a small f irm, where she got practical experience of Industry.There she worked for various Real Estate, Trading, Manufacturing Industries. She even jo ined her Dad’s business to understand Process of Dairy Industry and helped in development of ERP for the same. Even she suggested various Tax savings to be undertaken by a Dairy Industry. She qualif ied her Chartered Accou ntancy Course in May 2016, thereafter she joi ned Ernst & Young as an Indirect Tax Consultant. There she worked on GST Project for Big Corporates like BSNL, Discovery, Snap deal, Vodafone. She realised that how GST is going to bring Major change in Economy, so to leverage that she started working for her own Company lnfoTax Suvidha Private Limited, which known with the brand GST Suvidha.