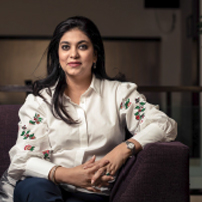 As the head of Government Affairs & Public Policy for Salesforce, Shweta leads advocacy efforts for the cloud-computing company and is responsible for managing relationships with government officials, regulators, industry bodies, think-tanks and influencers in the region. Previously, she led a team of public policy professionals at Uber across South Asia. Shweta is the Co-Chair of India Policy Committee of BSA (The Software Alliance), a leading global association of software companies. In this role, she works with policymakers to develop progressive regulations for the tech industry in areas like digital governance, data privacy and data residency. She is also the Co-Chair of industry body FICCI’s Ed-Tech Task-force, leading conversations on areas like technology-based learning and skilling.
Before joining the world of public policy, Shweta spent two decades as a journalist and TV news anchor. A British Chevening Scholar , she worked briefly with The Sunday Times, London. She was invited by the United States government for the International Visitor Leadership Program (IVLP) Fellowship in 2009, the US Department of State’s premier professional exchange program for current and emerging leaders. She was also chosen among 45 global leaders chosen for the Asian Forum on Global Governance (AFGG) Fellowship in 2013. She was ranked among IMPACT’s 50 Most Influential Women in Media, Advertising and Marketing in 2018, and top 10 most influential women on Twitter from among them.
Shweta has completed mid-career programs from the Wharton Business School , INSEAD Business School and the University of Westminster , London.
An award-winning journalist, she received several prestigious honours including the Ramnath Goenka Journalism Award by President of India Pratibha Patil in 2010,
Business Standard-Seema Nazareth Award for young journalists by President of India KR Narayanan in 2001, Young Women Achievers Award by FICCI in 2013 and the Business
Communicator of the Year by ABCI in 2011. In her role as the Group Business Editor for NDTV, she regularly interviewed global bigwigs including Sheryl Sandberg, Archbishop Desmond Tutu, Indra Nooyi, Richard Branson, Jeffrey Immelt, Michael Dell and Raghuram Rajan. She has also covered global economic events including G20 meetings, World Bank-IMF meetings and the World Economic Forum in Davos, and travelled regularly as part of the Prime Minister’s Media delegation. Shweta is seen as a champion of gender equality and is invited to speak on subjects like Diversity & Inclusion at the Workplace and Women in Tech. As the Executive Advisor for
Salesforce Women’s Network , the employee resource group for gender equality, she drives diversity efforts in her organization. She lives in New Delhi with her husband and two children.
Linkedin: (L): https://www.linkedin.com/in/shweta-rajpal-kohli-76b98386/