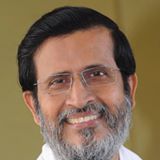 Born on May 10, 1949, he received a Masters in Commerce in 1972 at Andhra University, Vishakapatnam, India. He then taught commerce at Andhra Vidyalaya College in Hyderabad from 1972 until 1976, when he left academics to go into mindful service as a Hindu monk.

In 1985 he founded Lokenath Divine Life Mission (LDLM), to serve the poor. Today LDLM?s groundbreaking sustainable development programs serve hundreds of thousands in remote villages of West Bengal and in the slums of Kolkata (formerly Calcutta), India. It conducts street and village schools. Over 200,000 people who would not otherwise receive medical care are treated at LDLM?s mobile health van clinics. Its landmark MicroCredit self-help groups for rural women are helping them to become self-sufficient and leaders in their communities. Operating on the same MicroCredit model, Farmers? self-help groups teach organic farming.

In 2005, Shuddhaanandaa founded the Stress Management Academy, and began conducting global seminars on breathing, relaxation, meditation and positive thinking for schools, corporations, hospitals, prisons and other venues. He recently broadened his Simple Art of Managing Stress Program into Course in Mindfulness (CIM). Programs include MIndfulness for Corporate Excellence, Mindfulness for Academic Excellence and Mindfulness for Positive Parenting. The course is based on the three pillars of Meditation, Stress Reduction and Mind Power.

Shuddhaanandaa has inspired hundreds of thousands of people globally through his workshops, which are popular with youth, the corporate sector and those who are interested in deepening their spiritual life, whatever their tradition and belief.

Shuddhaanandaa began touring and speaking globally in 1990. Wherever he goes, his vibrant intelligence, fully engaged heart and remarkable presence touch his audience. Whether sharing his model of sustainable development, his vision of interfaith cooperation, or encouraging us to practice mindfulness and to befriend our own mind, he is always inspiring.

He presented at the World Hindu Conference in Frankfurt, Germany in 1992, was the keynote speaker at the Global Youth Conference, Washington D.C. in 2000 and lectured at Parliament of World Religions in Chicago, IL in 1993. He was a delegate to the Millennium Peace Summit, United Nations in 2000 and spoke about his micro-credit programs at the Parliament of World Religions in Barcelona, Spain in 2004. He presented at the International Conference on Spiritual Paradigm for Surmounting Global Management Crisis in Varanasi in 2012 and 2013. He was awarded the Man of Peace Award by the World Organization of Peace in Mexico in 2012 and the Lifetime Achievement Award by the S.T.A.R. foundation at the House of Lords, UK, in July 2015.

He has authored several books, including The Incredible Life of a Himalayan Yogi: The Times, Teachings and Life of Living Shiva Baba Lokenath Brahmachari and Your Mind Your Best Friend. He is a regular contributor to several magazines and is a popular figure on Facebook, Twitter and Speaking Tree, where he blogs daily, personally answers readers comments, and questions in his engaging, practical and humorous style. To be in his presence is to be in true joy of the spirit.