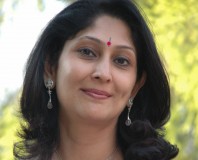 Shuchi, a Delhi University Graduate and a qualified Commercial Artist, underwent further training in Creative Arts and qualified for the degree of Bachelor of Education too.
She was invited to exhibit her paintings at the Rashtrapati Bhavan (House of the President of India) in January 2006 with other eminent artists. The President of India, who inaugurated the exhibition, along with The Prime Minister of India and other dignitaries present, highly acclaimed her works. One of the works, selected then, adorns the walls of Rashtrapati Bhavan and another painting ‘Leadership’ is a collection of The Prime Minister of India’s Office, New Delhi.
ICCR sponsored Shuchi and her works, held solo show in New Delhi and also sponsored two solo shows in Berlin and London. Some of these works are now a part of the permanent collection of the Nehru Centre, London and The Indian Embassy, Berlin. Her painting titled ‘Women through the Ages’ has been selected and showcased in a book by the Indian Council for Cultural Relations (ICCR) and is a part of an Exhibition travelling around the world.

Shuchi was felicitated with SANATAN KALAKRITI PURASKAR 2008 by Sanatan Sangeet Sanskriti for her contribution in the field of art. She performed a Jugalbandi by painting live while Shri Pandit Hari Prasad Chaurasia played his flute in front of an August gathering.
Shuchi also bagged the GURU SHISHYA PARAMPARA AWARD 2008 for her painting titled- ‘Conception’ awarded by Bhiku Ram Jain Society.
Shuchi has received LIFE TIME ACHIEVEMENT AWARD 2009 and a Plaque of Honour by International Congress For Women. In a prestigious event she painted live in 2009.
She also did workshops under Carnegie Wiell Fellowship programme 2009 , New York ,under the banner of government of New York.
The latest feather in her cap is the SADHNA INTERNATIONAL WOMEN EMPOWERMENT AWARD 2012 by Sushil Muni Ashram and Health Care Foundation.

In 2010, Shuchi made 21 paintings of the destitute, abandoned women live as she interacted with them in Sudinalay, the destitute women home. These paintings are printed in a coffee table book “IMLI” and were also displayed by the UN in IHC. In 2013 & 2014 DBS Bank, branch of a Singapore Bank invited Shuchi to display paintings which was very well received. International Congress For Women sponsored Shuchi for a graduation programme wherein she participated as a peace ambassador in an International Leadership Seminar on ‘ Peace ,Development and Transformational Leadership for Building Nations of Peace’ held in Bangkok, Thailand in July 2013.
Besides being featured in many other electronic media of excellence, she has also been interviewed by BBC, London. Constant & encouraging reviews have found place in the columns of National and International Dailies too.

She has conducted several workshops, participated in camps with many prominent artists, held several Solo Exhibitions and participated in various Group Shows. Prominent Private Art Collectors, Senior Officials, Art Lovers, the Rich & Famous have her works in their private and official collection.
Presently Shuchi heads the Department of Fine Arts at the prestigious Sanskriti School in New Delhi. The artist lives and works in New Delhi, India. Her works can be viewed at
https://www.shuchikhanna.com/