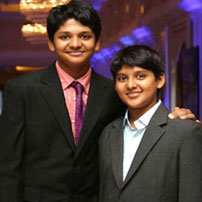 Shravan Kumaran, 18 year old boy studying 1st year Engineering his brother Sanjay Kumaran, 16 year old boy studying 10th grade, in Hiranandani Upscale school from Chennai, India, have been identified as youngest Mobile Application Programmers in India and one of the youngest in the World. They are FORBES 30 under 30 achiever award recipient. The boys also have created a company called GoDimensions Shravan is CoFounder & President, Sanjay is CoFounder & CEO.
They have developed 7 applications that are available in Apple’s App Store. They also have created 3 apps for Google’s Android Play store. Recently they launched their first app in the New Windows Mobile store as well. These applications have got more than 70 thousand download all together from more than 53 different countries. They are probably the youngest programmers in the world.
They have been featured in many Indian & Internation magazines and news papers they have been recipient of many awards, including being identified as Top.100 Technovators of India. They were awarded as Young Achievers of Digital India by CNN-IBN & CISCO in July 2016. They have been featured in FORBES ASIA 30 Under 30 list.