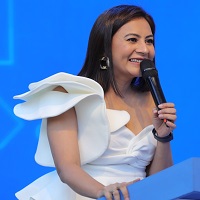 Shobha Rana is a leading Live Show Host and an award-winning Holistic Wellness & Life Coach. She has been a part of over 2000 global events across 27 countries in a span of 15 years. She has received the most coveted BW Wellbeing 40 under 40 award and Asia Today Best Holistic Wellness and Mindfulness Coach of the year 2021. She’s also received the Best Emcee Of The Year 2022 award, the most inspiring woman of the year award, and other accolades. As an emotional intelligence & life coach, Shobha has conducted sessions for 15000+ people in the last 7 years. Her clientele includes corporates, CXOs, bureaucrats and celebrities.
A double master’s degree holder software engineer and wellness enthusiast who switched gears to pursue her passion for being an orator.
She has worked with celebrities such as SRK, Priyanka Chopra, Jackie Chan, Tiger Woods and many more. She has hosted large format protocol events with the Prime Minister of not just our country but multiple other countries, presidents and also chief ministers.