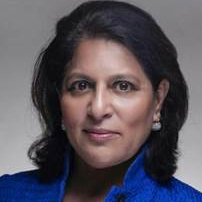 Shobana Kamineni is the Executive Vice Chairperson of Apollo Hospitals Enterprise Limited and a member of its founding family. Apollo Hospitals is the pioneer of private healthcare in India and is Asia’s foremost healthcare conglomerate. Championing Special Initiatives for over seven years, Shobana had steered the organization’s emergence as a proponent of integrated healthcare in India. She heads Apollo Pharmacy, India’s largest pharmacy chain with a pan-India network of over 3000 stores, 19000 employees; it serves 3,00,000 customers a day. She is a founder and a Whole Time Director on the Board of Apollo Munich Health Insurance, acknowledged as India’s best specialized Health Insurance Company for 6 years, consecutively. As lead director in Apollo’s research and innovation activities and cognizant of the convergence between Healthcare, pharmaceutical & biotech industries and the Academia, Shobana championed the creation and Incubation of a Biobank – a catalogued library of Ethically consented, anonymised bio-samples. The Biobank was recognized as one of the top 10 ideas in Life sciences by the Time Magazine for the decade. She is an Independent Director on the Boards of Blue Star Limited and Hero MotoCorp. Shobana also served on the Advisory Council of the National Cadet Corps (NCC). In addition, Shobana is Vice-Chairperson of the KEI Group, a diversified logistics, leisure & infrastructure business, that she founded with her husband. An active member of the Confederation of Indian Industry (CII), Shobana was elected as President for the year 2017-18. She is the first woman to become the President of CII since it began in 1895. Dedicated to ensuring that more women enter the workforce, she has launched the Power of Parity Initiative. Passionate about inculcating a culture of wellness, Shobana had championed the establishment of ‘Billion Hearts Beating’ – an NGO dedicated to educating fellow Indians about preventing heart disease and staying heart-healthy. Shobana has been a recipient of prestigious national awards for Entrepreneurship and Leadership. She was conferred an Honorary Doctorate Degree of Science by the prestigious Bryant University, USA, in recognition of her life’s work in healthcare & pharmaceuticals and her Leadership role in business expansion in India.