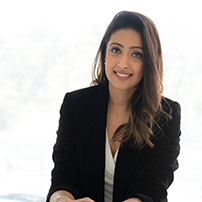 Shirin Mann Sangha was a boarding school student originally hailing from Chandigarh and went on to pursue a Master’s Degree in International Journalism from Cardiff University, Wales, United Kingdom. Upon returning to India, she started working as a crime journalist with a Delhi NCR based investigative paper. However, her passion for design eventually led her to launch NeedleDust.

NeedleDust was an outcome of her own wedding, Shirin didn’t want to pair her wedding lehenga with stilettos which was the norm. Hailing from Chandigarh, she identified a deep connection with traditional Punjabi jutti’s. Scouring the markets for the perfect pair, she came across jutti’s that were either too plain, boring or simply just uncomfortable. She then decided to design and get a pair made for herself. The outcome of which was an exquisite pair of gold, fuschia and red jutti’s. During this process, she spoke to the craftsmen and artisans to understand this delicate handicraft that is on the verge of extinction. NeedleDust came to fruition to revive this dying craft and bring jutti’s back to the global fashion scene.