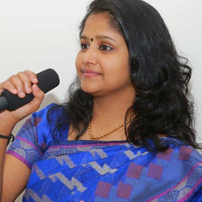 Shiji Maroli is a Professional singer, whose songs have been featured in Kannada movie Kengulabi & many other Malayalam & Kannada Albums. Shiji has lent her voice to many other popular Television & Devotional music projects in Malayalam. Shiji is working among children & mothers as a Counselor, Yoga teacher as well as Music teacher for last 15 years. She conducts seminars, workshops on human values, child psychology, Music concerts etc. She also writes Lyrics & does music direction for many songs Born at Kozhikode, Kerala, into a family of music enthusiasts. She was trained by Classical Singers Sri. Vaikam Shankaran Namboothiri & Tharani Ramachandran Namboothiri. She started participating in music & several other competitions from her childhood and won in the State Level, District