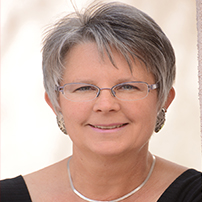 Sherri Brueggemann is a career professional in arts administration. She is the Public Art Urban Enhancement Program Manager for the City of Albuquerque, Cultural Services Department and has been managing art programs and public art projects in New Mexico for 20+ years. Sherri holds a Masters from UNM’s School of Public Administration with an emphasis in cultural policy evaluation. Sherri was a founding member of the Americans for the Arts Public Art Network and served on the PAN Council from 2000-2002. She is also a former printmaker, special events coordinator, winery owner, and has been a professor of practice at the University of New Mexico College of Fine Arts, Arts Management Program from 2008-2016. She has served as a board member for numerous arts, cultural and civic non-profit organizations in the Southwest, including the New Mexico Route 66 Association, the New Mexico Winegrowers Association, the Albuquerque Arts Alliance and 516 Arts. She helped spearhead the Albuquerque/ Bernalillo County Arts & Cultural Industries Economic Impact Study, the ABQ Cultural Count Task Force, the New Mexico MainStreet Downtown Arts & Cultural District, and Albuquerque Convention and Visitor’s Bureau Cultural Directors’ Tourism Steering Committees. Sherri has recently been appointed to the New Mexico Hospitality Association’s Space Tourism Committee.
In her spare time, she founded and manages the InterGalactic Cultural Relations Institute. The InterGalactic Cultural Relations Institute is a non-profit organization dedicated to exploring the role of art and cultural in future interplanetary diplomatic relations. Sherri’s interest in universal aesthetics, cultural traditions, synesthesia and space tourism culminate in the imaginary framework of what she termed, “The Alien Gaze” – that space within that imagines being sought by those “out there”.