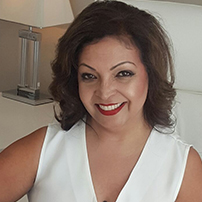 Shashi Gossain came to UK on 18th April, 1971, at the age of 12, together with her mother and three younger siblings.
She went to Beal Grammar school for girls in Seven Kings and then went on to do a Pharmacy Degree in De Montfort University, Leicester.
As a qualified pharmacist, she opened her first pharmacy at the age of 22 years and sold her pharmacy after 35 years of community practice.
She then launched an advanced cosmeceutical range, called “Pharmaclinix”, which was specifically formulated to help treat the skin problems associated with Asian & Darker Skin types. Pharmaclinix® is now distributed to over 30 countries & available in most leading Chemists, including in the Pharmacy at Harrods.
She has received many accolades to her name, including winning the Enterprise award by the Pharmacy Business awards 2005, Business woman of the year, 2013 by British Asian Awards, The Businesswoman of the Year 2012 award by HSBC, “Woman of the Year” Finalist of Asian Achievers Awards, 2010.
Shashi has been a keynote International speaker in numerous Dermo-cosmetic conferences, including in Kuwait, Dubai, India & in London.
She has written many articles on Health & Beauty in International publications, including Asiana Magazine & India Link.

She has launched several top Fashion Models through setting up events to “Find the next Top Model” for Pharmaclinix brand of skincare, which were aired on B4U Television throughout Europe and featured in Asiana Magazine.

Shashi has appeared in several television programmes and been the chief guest in several Lifestyle shows, with a whole series of Health & Beauty episodes aired on ZEE Companion, where she gave advise to people on healthy lifestyle, skincare, exercise & eating disorders.

Shashi has combined her “Passion for Fashion” with “Saving our Planet” and has set up the World’s first website to Buy, Sell or Hire Designer Indian Fashion @ www.TopIndianDesigners.com
This platform is a unique opportunity for others, to sell their perfectly maintained goods, as well as giving someone else the chance to buy and enjoy these items, whilst also reducing wastage.
The main idea is to encourage people to recycle their expensive clothes to reduce wastage and be more sustainable.

Shashi is the Patron of a Charity called “Fashion for a Cause Charity” & Trustee of “The Angeli Foundation”,
The Angel! Foundation was initially founded in India in 2008 to fight the cause of female feticide and other crimes against women. A letter of intent was signed with the United Nations Office on Drugs and Crime (UNODC) Regional Office for South Asia (ROSA), in New Delhi on August 28th, 2008.
The aim is to foster a new generation of empowered women who can reach their full potential.
VISION
Save a girl child, save a GENERATION!!
Educate a girl child, educate a NATION!!
From female feticide to limiting healthcare and education in favour of male siblings, to bride burning, unreported rapes and acid attacks, inequality in India exists from womb to womanhood.
The Angel! Foundation strives to work and redress the balance for women who are treated as second class citizens throughout their life from female foeticide to limiting healthcare and education in favour of male siblings, to bride burnings to unreported rapes and acid attacks.
The Angel! Foundation is working against the inequality that exists in India right from womb to womanhood.
Did you know –
1. More than 500,000 girls are killed every year in India even before they are born.
2. Nearly 40% of girls in India are married before the age of 18.
3. Almost 63% of women are illiterate in rural areas.
4. A total of 24,771 dowry deaths have been reported in the country in past 3 years.

“Fashion for a Cause charity” is a movement dedicated to creating Fashion events, which usually attracts the wealthier members of our society to attend and donate. The fashion shows use models which are of all shapes & sizes, to combat “body-image”, which is leading to anorexia amongst young girls.
The money raised is also used to buy equipment, e.g. sewing machines to enable the poor women in India to be self-sufficient economically.

Create opportunities for new and up and coming fashion designers around the world to showcase their creativity & talent and to raise awareness of the importance of our textile industry and sustainability.

“The Angeli Foundation”
which is dedicated to empower women to get education or skills needed to be self-sufficient in the poor Indian villages and other third world countries.

Part of the profits from the TopIndianDesigners online store will be donated to these charities.

Shashi is a mother to three children, who are all successful in their own right, and also has 4 grandchildren.

Shashi Gossain is very actively involved within her immediately community in Ealing. She has set up a local WhatsApp group, with a view to increase the security in the neighbourhood and frequently arranges Social events, where the local ladies are invited to discuss local issues of how to make the neighbourhood a safer place, and to provide a support system that directly affects the community.

Shashi Gossain’s motto is “Be more sustainable and not wasteful”