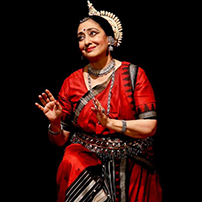 Padmavibhushan Guru Kelucharan Mohapatra said of Sharon Lowen in1987, after accompanying her 22 performance Festival of India-USA tour, “She is now one of my five best disciples who I can unhesitatingly recommend to represent the Odissi dance form anywhere in the world. Sharon has mastered the tradition”. In the decades since that endorsement, Sharon Lowen’s outstanding contribution to Odissi and other classical performing arts of India has been pioneering, inspirational and profound.

Over 45years in India, Sharon Lowen has become an icon of what can be accomplished on the basis of merit and passion without reference to caste, community or nationality. She has shown audiences in India and abroad that maintaining the highest standards of authenticity in classicism can appeal to all members of society while contributing new choreography, teaching, lectures and writing that moves the tradition forward and gives it vitality for new generations.

Her Doordarshan television appearances have set new standards of excellence (5 Heroines of Kalidas) and inclusiveness (2 National Programs of Dance on non classical traditional Mayurbhanj and Seraikella Chhau) and inspired film director K. Viswanath to feature Sharon as herself, a a renowned artist of Odissi of American origin, to motivate the heroine to value her own Indian dance heritage in the best Telugu film of 1988, Swarna Kamalam (Golden Lotus).

Following her BA and MA in Humanities, Fine Arts, Asian Studies and Dance from the University of Michigan, Sharon Lowen came to India in 1973-75 as a Fulbright scholar to continue Manipuri dance in Imphal and Delhi. In 1975, a workshop with Guru Kelucharan Mohapatra led to a lifelong commitment to this art and accolades for excellence in Abhinaya, especially Geet Govinda by Odissi masters, including Guru Pankaj Charan Das. Training in Mayurbhanj Chhau from the same year under Guru Krushna Chandra Naik led him to present her in Baripada in 1976 to demonstrate that a woman could perform this traditionally all-male genre and lead to training of women in Mayurbhanj district today. She also introduced Chhau to North America at the 1978 Asian Dance Festival in Hawaii and later Los Angeles Olympic Arts Mask Festival and is the first woman soloist of Mayurbhanj Chhau, promoting the art and traditional artists over three decades.

Alongside her exceptional contribution as one of India’s leading performing artists, Sharon Lowen:
• was instrumental in setting up the School of Visual and Performing Arts and Communication at Central University, Hyderabad;
• is generally acknowledged with transforming the recognition of foreigners as classical dance and music artists, not only as students, through her 1980’s-90’s six Videshi Kalakar Utsavs and Art Without Frontiers seminars, supported by the Delhi Sahitya Kala Parishad ,that presented over 50 foreign artists and changed public and rasikas opinion that she and the earlier Jon Higgins were the only exceptions. Today, serious exponents of Indian performing arts are recognized in India and they return to their countries to spread Indian Sanskriti, and many respect Sharon Lowen as the pioneer who made this possible;
• has organizing numerous exhibitions in the U.S. and Delhi, seminars in Seraikella, Delhi,
• Published books and articles with focus on Odissi and the transmission of tradition and internalizing the other;
• Served as a member of the USIEF (then USEFI) board from 2003-2007;
• Is committed to arts education and social uplift expressed through choreography projects, benefit concerts and consultations for Deepalaya, Akshaypratisthan, Palna, Delhi Police School, and other government and private schools in Delhi.
• Odissi disciples are recognized professionals in India and abroad
• Founded NGO Manasa-Art Without Frontiers with Kamalini Dutt and Naresh Kapuria to conduct, seminars, festivals, lecture demonstrations, classes and performances across artistic disciplines and communities.