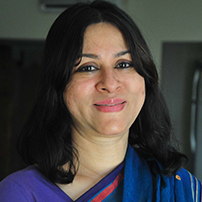 Sharmin Ahmad is the founder and president of the One Light Institute to promote peace and enlightenment through multidimensional education and experiential learning. Currently she is leading a project in developing a peace education curriculum and teacher’s guide for the grass roots and marginalized communities.
Sharmin emigrated to the United States in 1984. She earned a Master of Arts degree in 1990 in Women’s Studies from George Washington University, Washington, D.C. –and won a fellowship and a Women’s Studies Scholar award. She also completed graduate studies at GWU in Early Childhood Education.
She received a Woman of Distinction Award for her “outstanding contributions in the field of international goodwill and understanding” from Soroptimist International of the Americas Club, Washington DC. She has been involved with children’s education for nearly 3 decades. She has organized and led numerous workshops on human rights, peace education and interfaith bridge building. She has appeared on television and radio talk shows, and has lectured at various prestigious institutions in both the US and abroad.
In 2003 she published her first book “The Rainbow in a Heart” to convey the importance of a woman’s powerful role in shaping a non violent society through kowledge and love. In this bilingual (English- Bangla) fictional story a child searches for her perfect mother who will be her teacher and guide, before she is even born. This book had been approved for The Montgomery County Public Schools of Maryland, ranked among the nation’s top public schools, for it’s school system’s English Language Arts curriculum up to the middle school level. The book was placed in the highly recommended category. In comparing the relative worth of the book to other similar materials, the media specialist described it as “very unique” and as a “good asset” to an elementary and middle school collection. She had co-produced a peace dance drama (https://www.youtube.com/watch?v=pKtHS93w-3Y&t=1153s) based on the aforementioned book which was performed on stage at the prestigious F. Scott Fitzgerald Theatre of U.S.A and at the National Theatre of Bangladesh.
Sharmin’s historical memoir Tajuddin Ahmad : Neta o Pita ( Tajuddin Ahmad: Leader and Father, 2014) which was widely discussed in Bangladesh and among the Bangladeshi community living abroad, depicted the life and works of her father, the First Prime Minister of Bangladesh and who led the war of liberation of his country to victory in 1971.
In her book (2012) Daughter of Bangladesh Liberation Witnesses Tahrir Emancipation, Sharmin provided a first hand account of the Mass Revolution in Egypt and adroitly braided a true tale of redemption, heroism,peace and justice in this book.
Among her other notable writings she had also contributed a chapter “The Rising Phoenix and Weaving Peace” on Bangladesh war of liberation 1971 and the ordeals of women who were
violated in “A Force such as the World has Never Known: Women Creating Change” (November 2013).
She had established Tajuddin Ahmad Memorial Trust Fund( 2011) at Dhaka University, to inspire and financially support the students in higher education.
She has participated in and been a representative to many international conferences, including the Fourth World Conference of Women held in Beijing, the United Nation’s confernce on the status of women (CSW) in New York and the First International Non-Governmental Organizations Conference in Tehran.
She had initiated and organized workshops on prenatal education, a pioneering project in Bangladesh, to raise awareness about the important roles parents play in the physical and emotional development of their children in embryonic stages long before they are born.
She was featured in the Washington Post, and her editorial letters and articles have been published in various newspapers, including the Wall Street Journal.
Sharmin continues to travel around the world promoting peace education, human rights, goodwill and understanding among various faiths, races and cultures.