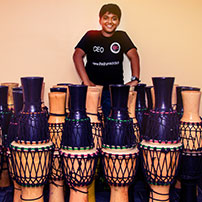 Sharaan.S.B. studying 7th grade in Kalashethra matriculation school, Chennai!
His father is an entrepreneur & most of the time he will be with him! Most of his friends are entrepreneur and he loved being with him!
That’s how his interest towards Entrepreneurship developed

During his 5th grade summer holidays his dad asked if he was interested to do internship to learn software, he agreed!
First day he was scared but then it was great working with them! He learnt basics of Python & learnt to travel alone using cabs!
He had the experience of working with 40+ employees!

During his 5th grade, because of his interest in painting, his dad asked him to join Adobe Photoshop & then Premier pro to edit videos!
He made few designs & edited few videos!

Then joined, SPI Cinemas as an intern & had the opportunity to learn animation basics!

He joined KIDSPRENEUR, to learn more about entrepreneurship & he was learning the basics of Business!

During Jallikkatu protest, they made a video explaining what is jallikattu & it went viral because of this his facilitator asked him if he can be a speaker of KIDXasia!

He accepted the challenge & researched about HARVARD TAMIL Chair, I was one of the speaker in KIDXasia! The video also went viral & it had 2 millions views!
A TV channel also interviewed him about Harvard Tamil chair!

During brainstorming in KIDSPreneur, he got few ideas for business & one of the idea was DrumsCircle!

He was introduced to drums since 1 year & he is passionate about drums! He is learning drums professionally since his second grade & is pursuing 4th grade in Drums in Trinity music college! He is also a part of World record drums event

He choose drumscircle as his business & he designed the logo! We launched the business Jan2018!

Feb18 executed the first corporate Drums Circle for an office inauguration of an IT company!

Till now they have executed almost 10 events across Chennai which includes shows in Orphanages as well!

16.06.18, they did our first Drumscircle outside Chennai & that too for a big brand “Kannan Devan Tea”, Munnar.

Of all the events the most memorable one was the last drumscircle they did in Arunodhayam Orphanage were he facilitated Autistic kids!

2 weeks back all kids also organized a marathon on Global Warming! He was the CEO of the marathon & he was responsible for Sponsors & Execution!

They had almost 8 brands right from Naturals & they had almost 80 kids participated in the event! It was a proud moment as the marathon was completely organized by the kids for the kids!

Have been featured in 3 Newspaper & 2 TV Channels have covered the story!