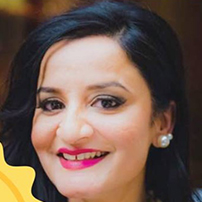 Shalini went to the U.K at the tender age of 21 years of age from Delhi, India in 1989. It was a start of a new life as a newlywed with eyes full of dreams and hope. However, her married life was not successful. With no family or friends in London, a young baby in her arms and a few pound coins in her pocket, it was the start of a new era in her life. Shalini was born in India and was raised and educated in Delhi. She completed her BA in English Literature from University of Delhi and soon after graduating was married to come to the U.K. In the UK, Shalini as a single parent picked up her education once again and decided to qualify in the legal field with a view to help other women who were abandoned by their husband, parents and were far- far away from their family with no skills in the English language or anyone to turn to. Shalini said she wants to inspire people, she wants someone to look at her and say “ because of you I did not give up”.
Shalini believes that women are strong they do not need empowering, it is the perception of others of a woman that needs to be changed.
Shalini V Bhargava is now a practicing solicitor with 17 years of experience in the legal field. She is registered with the Law Society of England and Wales. Shalini is an entrepreneur, she set up her own law firm in 2011 and is the managing director of Aschfords Law Solicitors based in Harrow, London. She specialises in UK immigration law and has helped people successfully from the UK and other countries such as Africa, China, India, Pakistan, Bangladesh, Sri Lanka and may more. Her business also assist with Family and Children law; Litigation; Wills & Probate and Tenant & Landlord disputes. Her law firm has progressed and expanded swiftly because of the good services provided and the word of mouth recommendation of her lovely clients. Shalini is kind hearted and compassionate, she has a charisma and a magical aura about her, she said “Client satisfaction is very important to me, I am very particular about giving clients the right advice and helping them to save money if they can. It sounds obvious, but it’s also so important to treat people like human beings and not just case file numbers. People come to see us when they are panicking, anxious and at their most vulnerable, so we need to cater for that.”
Shalini is listed in the Asian Whos Who for her achievements and is often invited as an esteemed guest on various TV channels to give legal advice. Shalini had the honorable opportunity to welcome the Pope Saint John Paul II when he visited India. In January 2018 Shalini received the Best Business Woman award by Mr Dinesh Patnaik Deputy High Commissioner of India (UK). She also won the crown of Mrs UK United Nations Global- Classic along with the title of Mrs Super talented. Shalini will now be representing the UK at an international level in Jamaica. She has recently received the SHE INSPIRES award as a “spirited fighter” for the challenges she has overcome as a young single parent in the U.K. She has also been honoured with the Women Appreciating Women award for her contribution to the society. Her strengths lies in her faith in God, belief in karma and eternal gratitude.