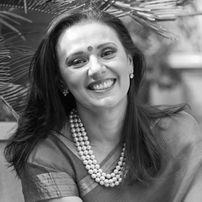 Deeply Involved and Unconventional
Shailja today stands tall at the acme of the talent acquisition industry across emerging markets in Asia and Africa, having built Stellar as one of the most well-recognized names in 25 countries across four continents.

The business is reflective of her own values, relentless passion, unimpeachable integrity & empathy. The processes and systems of a big corporate and the soul of a startup, is what makes Stellar one of the most unconventional firms in the space of talent management.

Shailja – the entrepreneur
Shailja has been the principal architect of Stellar’s growth over the last 20 years, a journey on which she has led her firm to different markets across all corners of the globe. As Founder and Chairperson of one of India’s most respected leadership advisory firms, she has played a pivotal role in shaping the growth trajectories of a large number of organizations in corporate India, ranging from multi-business diversified conglomerates to new age startup ventures. Her advice and counsel on business transformation strategy, senior leadership/ board level appointments, and organizational design and restructuring, are much sought after by leading Indian business houses and large global MNCs alike.

As one of the few successful female entrepreneurs in the executive search industry in India, Shailja has been a strong advocate for advancing gender/ minority diversity in corporate boardrooms and has contributed significantly to the ongoing dialog about the positive role diversity in corporate leadership can play in creating a better future for society, especially in the South Asian context.

Shailja is widely recognized as an industry thought-leader and subject matter expert and is an active member of various leading industry bodies. She has served on the India board of Entrepreneurs’ Organization (EO), a global, peer-to-peer network of more than 10,000 influential business owners with 147 chapters in 48 countries. Shailja has also served as the Vice-Chairperson of the Executive Recruiters Association (ERA). She is also a regular speaker at industry forums like NHRD (National HRD Network), CII and Rotary Club of India.

Shailja’s passion for entrepreneurship comes across in her accessibility to aspiring entrepreneurs, who routinely seek her mentoring for helping them build successful businesses. With a large following on LinkedIn, she is regarded as one of the most influential voices in the sphere of career development and professional growth in India. Over a career spanning nearly two decades, Shailja has built a rock solid reputation for her unending passion, absolute integrity, high energy and unwavering commitment to her work and the industry as a whole.

She firmly believes that good leadership is about inspiration and respect and it has been her constant endeavor to build an inspired organization where being better and doing better every day is deeply entrenched in the company’s ethos and core values.

As an organization, Stellar has consistently broken away from conventional commercial and operational paradigms, and under Shailja’s leadership, has emerged as a source of industry innovation and best practices.

She further believes that she is an eternal learner, and the purpose of her life has been to learn and to be better than she was yesterday.

As she drives the firm’s growth and expansion into new frontiers, Shailja aims to further consolidate Stellar’s reputation as the ‘firm of choice’ for leadership hiring in across all emerging markets, further deepening its ground presence in relatively untapped markets in Africa, Indonesia, Malaysia and Vietnam.

DNA of the company
Shailja believes CSR is an integral part of the DNA of her company, as well as of every individual that’s part of her team. She strongly feels that keeping in mind the socio-economic realities around us, giving back to society is not something that should be driven through formal directives, but should instead be a means for personal fulfillment. As an organization, there are multiple institutionalized programs that address a wide array of issues (girl child’s education/ environment/ sanitation), yet at the same time many initiatives at Stellar are driven through individual efforts of colleagues who feel very strongly about one cause or the other. She has made a conscious effort to move away from the mindset of looking at CSR as charity, and instead view it as a long-term investment in the health of the society we live in, with multi-fold returns in the long run.

Shailja the person
Shailja is well known amongst friends and colleagues for her love for adventure, something that’s taken her to the remotest corners of the globe. From deep-sea diving off the coast off Lakshadweep to high altitude skiing on the slopes of Gulmarg. She has been a national level athlete during her school days and continues to be an avid fitness enthusiast, and a passionate proponent of holistic development of both mind and body. A connoisseur of fine food ranging from gourmet to popular street fare, she is multi-linguist and is often heard conversing in several different languages.

Shailja holds a bachelor’s in Economics from Lady Shri Ram College and an MBA in Finance & Strategy from IMI, New Delhi.