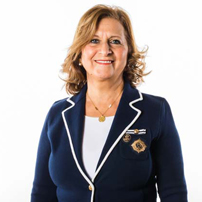 Dean of The Faculty of Arts & Humanities, The British University in Egypt (BUE)

SHADIA S. FAHIM is a Professor of English Language and Literature. She obtained her BA and MA from Ain-Shams University and her Ph.D from Exeter University, UK (1989). Her special research interest is the study of English literature from postmodern and cross-cultural perspectives, with focus on Modern Literary Theory, fiction and power discourse. She has also published in the area of the development of education. Prof. Fahim is also the BUE representative in the International Network New Initiatives and Challenges in Europe (NICE Network) a consortium of 45 higher education institutions across Europe and a member of their annual meeting.
She has extensive experience at both National and International Universities. Her academic career started in 1975 as a demonstrator in the Faculty of Arts, Ain Shams University. After obtaining her M.A., she was awarded a full time scholarship grant at Exeter University, U.K from 1983-89 and her Ph.D thesis was recommended for publication. In 1994, her book, Doris Lessing: Sufi Equilibrium and the Form of the Novel, was published by McMillan Press Ltd. in England and St. Martin in the United States. She was awarded a Fulbright Post Doctorate scholarship in 1995. As a Fulbright scholar, she participated in the George Washington University & the Binational Fulbright American Studies Summer Institute, Egypt (2003) and was nominated advisor for the American Studies Regional Conference on Developing American Studies.
Before joining the British University in Egypt (BUE), she founded and was Head of the Department of English Language and Literature at the Higher Institute of International Languages from 2000-2005. She earned her Professorship Degree in 2005 and was consultant for the English Programme in New York Institute for Technology (NYIT). She joined BUE in September 2005 as a full Professor and was assigned several developmental tasks as the Teaching & Learning Coordinator and the English Programme Coordinator for the BUE Centre for Community & Consulting Services (CCCS). In 2009 she was appointed Head of the English Department. In 2016, she held the position of Dean of the Faculty of Arts and Humanities at the British University in Egypt. Prof. Fahim was also an UNHCR consultant and has worked as principle investigator on a research in the MENA region focusing on refugees and the provisions of higher education in the region. She was awarded in April 2018 a certificate of appreciation for obtaining international research grant for the Faculty of Arts and Humanities by The British University in Egypt (BUE).