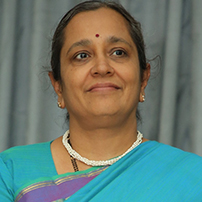 Dr Seetha is the Space Science Lead at the U.R. Rao Satellite Centre. She is at present interacting with the Space astronomy Group at the Centre. She was earlier Director at the Space Science Programme Office at ISRO, and was therefore responsible to ensure co-ordination of all space science activities of ISRO. She is also the Principal Investigator of the ASTROSAT since April, 2011.

Her areas of research is in the field of astronomy, particularly the study of variable stars in x-ray and optical bands. She has also contributed extensively to the development of space science instrumentation for Indian science payloads. Some of them are the Gamma ray burst experiment , the Indian X-ray astronomy experiment and the Scanning Sky monitor on the ASTROSAT; She has also been a member of the Whole Earth Telescope consortium from India.
She has over 80 publications in refereed journals, has guided 5 students for Ph. D,
Main Awards:

The C.V. Raman Young Scientist award in Physical Science for the year 2003. The Best woman scientist award for the year 2012 from the Astronautical Society of India. Member of Team excellence award of ISRO for ‘AstroSat mission’ for the year 2015 Felicitated by Bhart Niti and FKCCI with award of excellence, 2017 Distinguished Alumni award from the Old Students Association of Hindu College, Delhi, 2017 H.R. Pratibha award for women of distinctive vocation by Rotary Club downtown Bangalore 2017
Educational Summary
Dr. Seetha completed her Ph.D. in Physics from Indian Institute of Science, Bangalore; She did her M. Sc in Physics at IIT Madras, and her B.Sc.Physics (Hons) at Hindu college, Delhi University. She completed her schooling from Kendriya Vidyalaya Andrewsganj, Delhi