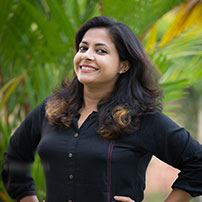 PUPPET MEDIA is the brainchild and hard work of the dynamic and super talented Seetha Lakshmi. Seetha Lakshmi is a name synonymous with Media Planning, Project and Marketing Designing, Celebrity Management and Promotions in the Malayalam film industry. Seetha has proven her media planning skills and communications expertise in various streams of this industry. She is trained Classical Dancer too.
Her tryst with Media began during her college days when she started working part time as a VJ on Asianet. She worked in several channels, in all kinds of media roles behind the screen, gaining precious experience on the go and all that while completing her graduation and post-graduation diploma. First job, after completing her education, was at Oxygen FM, Dubai as a Program Producer and RJ. However it was the next job at Surya Television that changed her routes to PR in entertainment industry permanently. In 2013 Seetha resigned from Surya TV and started her independent career in Movie Promotions as a freelancer, with the film Honey Bee. Ever since then there was no looking back. Till date she has worked for over 60+ Malayalam films, 2 Tamil films and a handful of corporate events followed her repertoire. She still occasionally does the VJ and celebrity interviewer role when in demand.
She also handles celebrities for various events and promotion works with her artist management team. Her major events where she did celebrity management are Flowers Indian Film Awards 2018, Asianet comedy awards 2017 and Yuva award 2017 which was held in Qatar. She also works as a personal Celebrity Manager for many notable celebrities from Malayalam film industry.
Seetha has been a role model for many woman in the industry who usually doesn’t take up promotion or media planning as their career. Many notable Medias have given stories about her successful career n media planning. In her interviews, she says she wanted to brake the taboo of woman, being only an object in front of camera, instead she proved that woman can do wonders in the media planning and marketing field as well. She received an award from Indi wood for being the best media planner for the year 2017.
The feather in her cap came as the supreme success of the first 150 crore Malayalam film, Pulimurugan that she diligently promoted across the country. Along with that, the cult movie Angamali Diaries also. In 2016, Seetha registered her Media Management Company as PUPPET MEDIA. Another top movies like Kammara Sambhavam, Mohanlal, AADU 2, Ramaleela Cult movies like AAMI and Thondimutalum Driksakshiyum are also in the list. At Puppet Media, Seetha has curated a strong team that executes the campaigns designed for its reputed clients. She continues her victory journey in 2018 also. Her clients value the relationship built with her, just as much she values them.