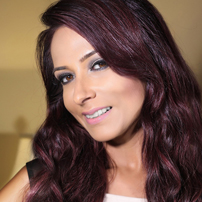 CEO of House of iKons

Savita Kaye founded House of iKons in 2013 to support talented fashion designers as well as up-and-coming models and musicians. It’s one part of her empire, Lady K Enterprises, which includes Lady K Media (established in 2011 to offer consulting and PR services) and Lady K Event Management, which puts on high-profile corporate events. Before this Savita studied engineering and business management followed by marketing, and went on to work in advertising and corporate banking. After the banking crisis she took a different direction and started exploring her creative side. Now she writes on fashion and current affairs for DESIblitz (www.desiblitz.com) and her love of music and chatty manner won her a slot on Hot Asia Jamz (tune in online on Friday nights). “It all happened by accident,” she says, modestly.
Savita, CEO of Lady K Enterprises, and Benjamin Amure, the director of global operations, both had experience of heading up production for LFW events. So last year they thought, “Why not launch our own event?” The first House of iKons London Fashion Week (then called ‘Angels of Fashion’), held in aid of The Prince’s Trust, exposed Savita’s crop of designers to international buyers and the press.
That was the test run and this year’s show was held at the Hilton London Paddington, supported by Asian Wealth Magazine. Innu London, whose collection featured £15m worth of diamonds supplied by Mozafarian Jewellers, opened the show. Savita had the pressurised job of standing backstage and removing each piece of jewellery from the models as they exited the runway to make sure it was all counted and safely returned. The statement piece, an Innu London dress entwined with sparkling diamonds, sent a lightning bolt through the crowd dotted with royal families from the UAE, buyers and journalists.
House of iKons London Fashion Week certainly did a good job of showcasing an international flavour, as it featured designers from Los Angeles (Rocky Gathercole);Egypt (Marmar Halim); South Africa (Albert Martincich); Dubai (Micheal Conde, Daveygurlee, Varun Mohan and Johnny Bagadiong); Oman Sherin Mansoor); London’s 11-year-old sponsored young designer Kasia Fallon; and from Abu Dhabi the unstoppable Yen, among others.