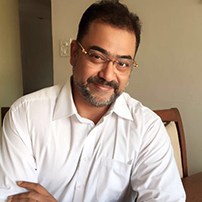 “What we as innovators need to do to give back to our motherland is to build robust foundation for digital India – this will mean focusing on and optimizing the benefits of artificial intelligence and IoT to create grass root level impact in India addressing challenges like medical aid despite geographical barriers, traffic jam resolutions in urban areas, predicting commodity prices and easing farming related barriers” – Sauvik Banerjjee One of top 6 technologists globally with over
150 implementations running across the globe, Sauvik Banerjjee is a technologist and Vice President Digital Initiatives, Advisory to Group Co’s & CTO of TATACLIQ at Tata Industries Limited by profession. He is a tech evangelist and entrepreneur by heart, has built two
successful start-ups & sold them in the UK and has been ranked right at the top of global CTOs online by OnlineEducation.com. Having mentored over 600 senior management over the years, Sauvik in India is also mentoring select start-ups on building successful business models. He is on the board of advisors for several companies and start-ups alike. He has been responsible for disruptive innovation ideas in technology and omni-channel commerce that have earned him the distinction and title of being one of the only 6 people (the only person of Indian origin) in the world to have worked on all global Omni channel platforms. Sauvik also holds a robust track record in P&L roles where he has delivered over 143% growth, 122% growth across India and Europe for organisations like Infosys, Accenture and SAP. At SAP he was the Chief of Technology for SAP Global’s Omni-channel and Digital vertical.