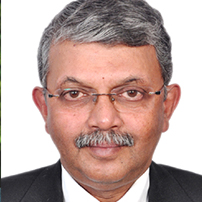 Mr Saurabh Sanyal is a professional with over 33 years of experience in Armed forces and corporate.
He is an Engineer and a post graduate from IIT Madras. He has done his Masters in Disaster Mitigation and MBA. Mr Sanyal hung his boots prematurely as a Colonel from Army Headquarters, New Delhi. He has participated in active service in Counter Insurgency Op Rakshak in J&K and Northeast, Op Parakram, Op Bajrang and Op Rhino in the Northeast and was commended by the Chief of the Army Staff twice in 1994 and 2005 for distinguished Service. He has been planning and implementing projects on infrastructure at National and international levels in construction, Power / Energy sectors in Africa, SAARC countries and across India. He has been a keen communicator with the ability to relate to people across all hierarchical levels.
He has been working with the PHD Chamber of Commerce and Industry as Secretary General since 01 May 2013.
He has been a member of the Indian Building congress, Indian road congress, and the institution of engineers.
He is a keen sportsman and an avid golfer.