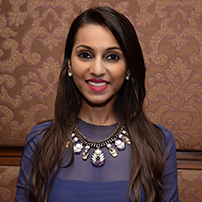 She is an MBA (with Distinction) from Imperial College, UK, an MSc in Operational Research from Lancaster University and a BSc (Honours) in Statistics (Gold medalist & Delhi University topper) from Lady Shri Ram College (LSR), Delhi University. She is also a qualified astrologer, Vaastu Shastra and Numerology professional.

She applies the scientific and mathematical models in Vedic sciences to deliver authentic services through her venture.

Her contribution to Vedic sciences has been featured in worldwide media publications including Forbes, New York Magazine, LA Times, Voice of America, Times of India and many more. She has been awarded by Department of Science & Technology, Government of India for her ground breaking venture www.Shubhpuja.com