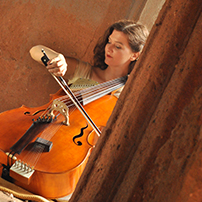 Saskia Rao-de Haas is a world-renowned virtuoso cellist, composer, cultural entrepreneur and educationalist from the Netherlands. She was trained as a Western cellist from a young age onwards, but changed direction when she came in touch with Indian music in 1993. She is known as a master performer in Indian classical music and hailed as the creator of a new instrument: the Indian cello. Flute Maestro Pandit Hariprasad Chaurasia speaks of his disciple Saskia as “someone who has been taught by God.” According to him, “everybody should listen to her music”. Her compositions with her Sitarist husband, Pandit. Shubhendra Rao are well known all over the world.
Critics and audiences alike have praised her for artistic depth and technical virtuosity. Saskia has performed at all the most prestigious concert halls across the world, such as the John F. Kennedy Center for Performing Arts in Washington DC, Musee Guimet in Paris, and the New Directions Cello festival. She is the first non-Indian artist to have performed as a Soloist at the prestigious Doverlane Music conference in Kolkata. As a composer, she is eminent at bridging the Western and Indian classical music traditions. Along with Pt Shubhendra Rao, she has composed music world leaders like German Chancellor Angela Merkel, Prime Minister Narendra Modi and the Dutch Prime Minister She co- founded the Shubhendra and Saskia Rao foundation to promote the joy and benefits that Indian classical music can bring to children. She created the first complete music curriculum for Indian music for young children based on 6 storybooks. Over 20,000 children have already benefitted from the ‘Sangeet4All’ music curriculum. The books Saskia has written help children to experience the importance of having music in their lives and the transformative power of the Indian classical music traditions. Teacher handbooks, songs, instruments, workshops, teacher community and over 400 lesson plans, accompany the storybooks to ensure proper implementation of the curriculum. Saskia lives in New Delhi with her husband and their 13-year-old gifted pianist son Ishaan.
SASKIA IN THE NEWS: Her cello music truly speaks what cannot be expressed, soothes the mind and gives it rest, heals the heart and makes it whole, flows from heaven to the soul…. BITS, Pilani

Saskia’s control over the finger board and bow appeared to be total… her varying speeds in the Jhala were scintillating, Indian express, Hyderabad
With great virtuosity and artistic depth Saskia Rao-de Haas introduces a new sound in the world of Indian classical music which is received worldwide with great enthusiasm by critics and audiences alike, Documentary for Dutch radio
Sitting on the floor like any other Indian musician, Saskia started the concert with the rag Bheempalas. The instrument tone was mellow and pleasant. She delineated the raga with due stress on the pivotal swaras. The phrases became vibrant, as the tabla joined and the sound polished and fluid, Deccan Herald, Bangalore
Music knows no boundaries. One such was the performance of Saskia de Haas who recently held the audience in Delhi spellbound with her rendition of Indian classical music
The Week, New Delhi
The best of both worlds on cello, The Hindu, New Delhi
Her instrument has a sound quality unmatched by any other string instrument BroadwayBaby, Edinburgh
Movingly Meditative- New York Times

Article from the Score magazine August 2017: