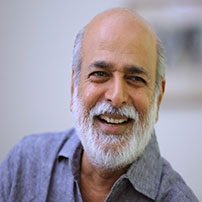 Sashi Kumar is a print and broadcast journalist, filmmaker and media entrepreneur. He founded and chairs the Media Development Foundation which administers the Asian College of Journalism. He was among the earliest Newscasters in English on national television, Doordarshan, Middle East Correspondent of The Hindu and news anchor on Radio Bahrain in the mid-1980s. He has anchored and produced numerous shows, documentaries and features for national television in India.

In 1992 he founded and launched Asianet, India’s first satellite TV channel in a regional language (Malayalam), and the country’s first statewide cable TV network in Kerala. In 2004 he scripted and directed ‘Kaya Taran’ an award winning Hindi feature film based on the 1984 anti- Sikh riots and the 2002 Gujarat riots. He has acted in a few Malayalam feature films. He writes a regular fortnightly column titled Unmediated’ in Frontline; it is also the title of the book comprising his essays and articles published by Tulika Books in 2013.

He has received many awards for his work in journalism and films.