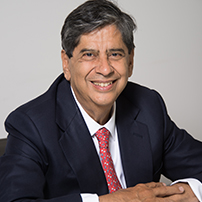 Sarosh Zaiwalla founded Zaiwalla & Co. Solicitors in April 1982 with offices in Chancery Lane, London. He oversees all the activities relating to the firm which over the years has exported millions of pounds’ worth of legal services. Over the years Mr. Zaiwalla has been involved in over 1200 International Energy, Maritime and Construction Arbitrations in London and worldwide either as a solicitor, Counsel, party-appointed Arbitrator or Sole Arbitrator. He has acted for many prestigious clients including the President of India, the Government of the People’s Republic of China (PRC) and the Iranian Government. Mr. Zaiwalla is a Freeman of the City of London and a Livery Man of the Worshipful Company of World Traders. Mr. Zaiwalla was also a member of the International Court of Arbitration of the ICC, Paris, from 1990 to 2002. He is a CEDR (Centre for Effective Dispute Resolution) mediator. In October 2002, Mr. Zaiwalla was awarded with India’s Annual National Law Day 2002 by the Indian Prime Minister for his outstanding contribution to the field of International Arbitration Law. In May 2004, Mr. Zaiwalla had the honour to be personally asked by His Holiness the Dalai Lama to facilitate a dialogue with the Government of People’s Republic of China (PRC) with a view to finding a peaceful resolution relating to Tibet. In October of 2007, Mr. Zaiwalla was invited by the United Nations Secretary General Mr. Ban Ki Moon for an extensive one-to-one consultation on issues relating to World Order. In June 2008, he was appointed an Arbitrator to the Panel of Arbitrators by the Korean Commercial Arbitration Board under the Arbitration Act of Korea and Article 4 of the Arbitration Rules of the K.C.A.B.
Mr Zaiwalla has undertaken several overseas visits as part of the business delegation accompanying the Ministers and the Lord Mayor of the City of London.