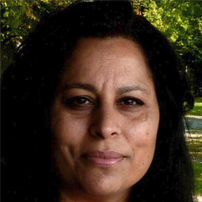 Santosh is a human rights and equality campaigner living in the UK. She is an ex Civil servant and held a number of senior roles at the Department of Health including leading on Regulation, Governance, and Risk Management. Santosh has been one of the leading figures in the campaign to outlaw Caste-based discrimination in the UK. She is the current Vice Chair of the Anti Caste Discrimination Alliance and President of the Federation of Ambedkarite and Buddhist Organisations UK. She is the co-founder of CasteWatch UK, Anti Caste Discrimination Alliance and IndiaMattersUK. In September 2014 Santosh put forward and pursued a proposal to the then Congress-led and then the BJP Government of Maharashtra (GOM) that they fund the purchase of the £3.1million 10 King Henry’s Road, London NW3 – the house Dr B R Ambedkar lived in between 1922-23 – and turn it into a memorial. This house was purchased by GOM in September 2015 and inaugurated by the Prime Minister of India in November 2015. In 2007, Santosh was awarded an MBE in the Queens Birthday Honours for her services to Better Regulation at the Department of Health.