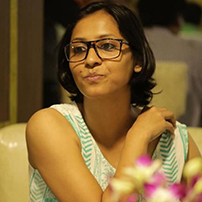 Sanjukta Dutta started the journey as Last Mile Delivery Partner 3 years back with a small station of about 300 sq ft dealing with 100 packages and with sheer grit and determination she held firmly the area of Logistics, which otherwise is known as a Male dominated area of Enterprise. In a Terrain like that of North East India, dealing with issues like that of Floods, Landslides, poor road infrastructure, and other political issues, she not only established herself in the area of Logistics but she also crossed borders and now she is currently operating 5 delivery stations, 2 in the state of Assam, located in Guwahati and Tezpur for Amazon India. One each in Itanangar the capital city of Arunachal Pradesh, Imphal the capital of the state of Manipur and in Jaigaon, West Bengal the gateway to Bhutan. She is catering 3600+ shipments per day across both locations covering 28+ Pin codes with the ability to cater for 7000+ packages in peak seasons.

She is now in process of scaling up the operations and now is in talks with major e-commerce players for managing their last mile as well as middle mile delivery process across North Eastern Region. The target she has set for herself is to have a capacity to handle 20000+ shipments per day and start her own middle mile management in another 2 years’ time and establish operations in all major towns of North East India. Sanjukta’s passion for Trucking and warehousing is evident in the work she does in her Region. Her work in the region is applauded by people from the region and outside too. Sanjukta Dutta has been featured by MyGov in 2018 as one of the emerging women leaders of the state of Assam and in December 2018, she was an Awardee of the 6th Samudra Manthan Awards, the most coveted awards to recognize excellence in Maritime and Offshore Logistics Industry of India as a Young Entrepreneur that was held in Mumbai.

Another side to Sanjukta is her passion for Assamese Cuisine and has been promoting her food in the region and outside too. Recently concluded The World Heritage Cuisine Summit 2018, in Amritsar, saw her as an emerging home chef where she brought Assamese Food to the limelight and cooked along with Chefs from 40 different Countries and the country as well. She is a promoter of the Art of Slow Cooking