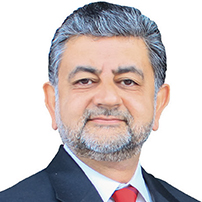 Sanjay has been leading Teleperformance Indiaa sthecompany’s “ChiefExperienceOfficer” since2001, part of the $3.7 Billion TeleperformanceGroup. He puts a strong focus on the growth and closing the gender gap in the Indian Outsourcing Industry. He has been the guiding force inorganizing the 1stIndo-USBPOSummit and his thought leadership is sought after for expanding the industry into the non metro cities of India, leveraging the vast demographic dividend of the 100 leading smart cities in the making.
Recognized by Contact Center World Association as the Industry Champion for India, Sanjay is also an active member of the Northern Region Council, NASSCOM. A champion for the cause of primary education of underprivileged children and safeguarding the environment, Sanjay front-ends various initiatives organized by Teleperformance India as a part of their “Citizens of the Planet” &“Citizens of the World” initiatives.
Sanjay’s dynamic perspective on the macro industry outlook is often sought by leading newspapers, television channels, government authorities, associates, consultants & industry bodies.