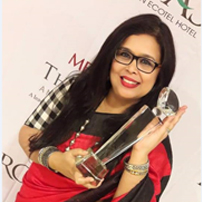 Sangita Nambiar is a distinguished Sangeet Ratnakar from Bangiya Sangeet Parishad, Kolkata in Hindustani Classical Music and Nazrul Geet. Also well versed in other forms of Indian music like Hindi Ghazals,Bhajans,Contemporary music,Folk music,Nazrul Geeti,Modern Bengali and Rabindra Sangeet.She has performed on Doordarshan programs and has a rich experience in many forms of Indian Classical and Light music.She has won many accolades and prizes in music competitions and has featured as a judge in numerous competitions.She has been performing live since
childhood on prestigious stages and has won many awards for her performances. She has been trained in music under the guidance of the following very renowned gurus like Biman Mukhopadyay,Shantanu Bandhopadhay,Dinobondhu Gangopadhyay,Sanjit Mazumdar and Subodh Gangopadyay. She travelled to Cannes Film Festival ‘19, France for the official screening of ”The Glorious Dead”, an international movie she lent her voice to. Her first Bengali album “Megher Anchol” was launched in 2013 by Sagarika Music and was widely appreciated and loved by everyone who enjoys Bengali music and crowd
favourites like “Kichu Kotha” and “Oi Ghum” from the album are being telecast on Bengali channels even in 2016. She has launched her latest Hindi album “Ek Tukdaa Dhoop Ka” in Mumbai and
Kolkata in October 2015.This album provides 10 songs with a blend of range of styles from classical to contemporary based on soulful and melodious music.The rendition of each song belonging to different styles of music has been performed with versatility which is a treat to music listeners who love original independent music.This album has been launched in the market and marketed by Golden Voice Entertainment. Bengali music lovers who are fond of original music can listen to her immensely successful earlier album which is marketed by Sagarika Music. In 2017, she launched “Mukto Jhinuk Dhaka”, a Bengali album which has given her a lot of recognition. This has been her best work till date, according to the music industry. All her albums are available at music outlets as CDs and on Amazon.com,iTunes,Gaana.com, Saavn and all her songs are available for use as caller tunes by all major cellphone companies in India. She is highly interested in making original experimental music and collaborating with other like minded musicians.Sangeeta promises to her listeners more soulful melodies in the future. Currently, she is working on new regional and national projects. She is the founder of a very successful musical institution called “SAAZ The Journey” which has helped hundreds of young students learn how to sing. She has a band called Joy Express, with many other professional musicians. Joy Express is an initiative that was created by her and numerous successful singers and dancers have joined her in striving to provide this experience for our audiences. The band makes visits to orphanages all over the country to present complete cultural performances for the less-privileged. Seeing the smiling and ecstatic children is what drives them.