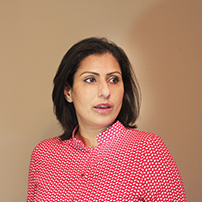 Born in Guwahati, North-East part of India, Sanchayita started her career straight out of college promoting the then new technologies that was just launched in India. Pagers, mobile and websites (in the year 1995).
Being born in an entrepreneurial family, she saw that having a business of her own was the best way to be independent and earn her living. She also ventured into direct selling, thus partnering with a 100 year old American cosmetic company that newly launched in India. In 9 months, she featured among the top 10 distributors in the country. She also hosted a regional television show weekly which went on to become the first show to reach 100 episodes in North-East India.
She tried a few businesses. her forte was that she came from North-East India and had contacts there. She imported tea and also sampled tea from Assam to Harrods. She also started connecting weavers of North-East India to the west. This all needed infrastructure, manpower and capital.
They create Digital Entrepreneurs and help people market their products and services online whether it’s local or global.