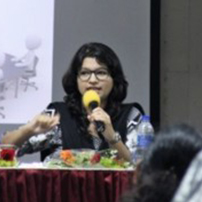 Sana Hakim is an Advocate by profession, Since the year 2009, she specialises in family and criminal laws especially laws related to crime against women such as sexual harassment, domestic violence etc. Apart from the above, since the year 2016 she has been a partner in an organisation called POSH at work (www.poshatwork.com), the said organisation is empanelled with the Ministry of Women and Child (Government of India) to conduct trainings and awareness sessions on the Sexual Harassment of Women (Prohibition, Prevention and Redressal) Act, 2013. In her capacity as a partner of POSH at work, she has also conducted several talks, lectures and interactions with management of several organizations as well as complainants / victims, played an active role in conducting of inquiry in various cases related to sexual harassment and facilitated filing of criminal complaints, F.I.R (if required) and briefing and counselling on legal consequences of filing false complaints and prevention thereof.
Academic Qualifications:-
Sana Hakim is a Commerce Graduate from Jai Hind Colllege, Mumbai. She also holds an LL.B. Degree from the prestigious Government Law College, Mumbai and a Masters of Law Degree from the Mumbai University

Distinguished and notable awards/recognition
Her academic achievements involve:-
In 2006, Stood First in Mumbai University in subject of Management in TYB.Com In 2011, Stood Third in the Mumbai University in her Masters of Law Her name has featured on various occasions in the national newspapers such as Times of India, Mumbai Mirror and Hindustan Times for some of her cases related to Divorce, Domestic Violence, for the cases argued by her in the Family Court as well as the High Court. She was also featured in the Super lawyer magazine. She was also quoted by the renowned newspaper Business Standard in her capacity as one of the partners at POSH at work.
Work Experience:-
She has several years of experience in practising in the Bombay High Court, Sessions Court, Family Court and various Magistrate Courts around Mumbai and Thane, in the field of family law and criminal law. From the years 2012 to 2018 was a visiting faculty in a Government aided Law College and taught the degree as well as Diploma courses, including subjects like Constitution of India, Indian Penal Code, Legal Language, Trademarks. She has conducted more than 70 awareness sessions and Internal Committee trainings for various organisations such as Tata Group, Godrej, Indian Institute of Management, Indore, Indian Institute of Management, Kozhikode, Indian Institute of Technology, Powai to name a few. She was also one of the facilitators of POSH at work in conducting training of Internal Committee of the Mumbai Police in June 2017, training them on the procedure for conducting inquiries of complaints of sexual harassment. To enumerate a few of the Government and Public sector organisations: She has conducted awareness sessions for the Ministry of Textiles, NABARD, UTI, Mazgaon Dock Shipping Corporation as well as in the Family Court, Bandra Mumbai. She has participated in over 50 inquiries of complaints of sexual harassment, as an external member on the Internal Committees of various organisations across sectors.