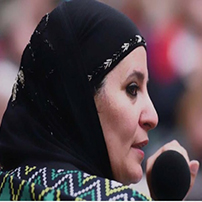 Samia Assed is a Palestinian-American Muslim who is a proud wife, mother to 9, local business owner, grassroots feminist and human rights activist. Samia is currently the President to the Coordinating Council of the Albuquerque Center for Peace and Justice. She also sits on the board of the Southwest Organizing Project. Samia has served as a panelist and has spoken for numerous causes/issues such as on Islamophobia, the Palestinian struggle and has worked campaigns with various groups such as;; Sabeel, Jewish Voices for Peace, Red Nation and many more including having co-organized the New Mexico Delegation to the Women’s March in Washington, D.C. Samia is also the first Muslim-American women to serve on the State Central Committee of the Democratic Party of New Mexico.