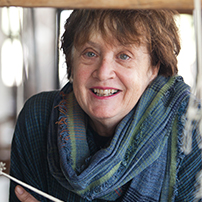 1979. Co-Founded REHWA SOCIETY
REHWA Society is now almost 35 years old. It has revived the entire Handloom story in Maheshwar, MP and continues as a leader; guide in design, marketing and quality control.

2014. Founded THE HANdLOOM SCHOOL
A dream project conceptualized for years -The Handloom School addresses handloom weaving which is dwindling at an alarming rate, due to lack of support. Generations of skill and knowledge could be lost; not to mention much needed
Employment possibilities for rural India, if these traditional skills are not passed along to a new generation of weavers. They need support, marketing channels, admirers, skill enhancement: they need links to today’s world; and strong guidance along the way.

Projects In Madhya Pradesh : DINDORI & BHALAGHAT
Both tiny villages with a dwindling weaver population. WomenWeave brought attention to the plight of the tribal weavers of dindori district, who were extremely able; but had lost their traditional markets.

The ripple effects of this and other new projects include: stable income for a very vulnerable community, skill enhancement for formerly unemployed women and the addition of new design to a very isolated area, where the traditional markets were disappearing.