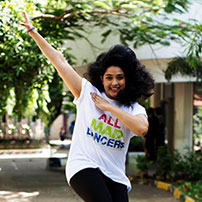 Sagarika Ganeshyam is a group fitness instructor and professional dancer, she is a student of Kokila Hariram, founder of the Academy of Modern Danse, a pioneer school in formal dance education.
She finished her schooling from SISHYA School, Chennai and went on to pursue an undergraduate degree in Psychology from the Women’s Christian College and a Post graduate degree in Film and Television from the Foundation for Liberal and Management Education (FLAME )for which she received a gold medal for extraordinary all round performance. She was also a roll of honour student and the first ever female captain of FLAME and head of the student council.
Dancing , teaching and spreading the love for movement,dance and fitness is very close to her heart.
Sagarika has completed 8 levels of Jazz under the syllabus of the Commonwealth Society of Teachers of Dancing popularly known as CSTD , JASON WINTERS CONTEMPORARY FOUNDATION COURSE AND five levels of Hip Hop under the syllabus of the United Kingdom Alliance of Dance , Music and Theatre
She is also a certified ZUMBA Fitness Instructor , Kids ZUMBA fitness instructor and AQUA ZUMBA instructor .
She has performed in over 100 commercial shows at a regional , national and international level.
She has taken part in musical productions staged in the city of Chennai and Bangalore.
She along with two others secured the 2nd place in the APDC competition at Singapore 2014 under the trio category.
She teaches children at various schools and works with adults as well
Sagarika is a personal instructors and teaches a lot of people at their homes for groups as well as for individuals . She also choreographs for sangeets and works with children and teenagers who are physically unfit or those with special needs.
She teaches ZUMBA at the Academy of Modern Danse , Russian Cultural Centre and creative movement and dance at various schools . She also teaches AQUA ZUMBA and AQUA FITNESS and conducts dance workshops and sessions at schools, centres etc . Her current interest is to popularize AQUA FITNESS and BEYOND BARRE in her home city and hopefully nation wide too.
She recently returned from the states after attending a bunch of fitness certification courses . She attended TRX , U JAM , BEYOND BARRE , BOOTY BARRE , AQUATIC FITNESS , PRE NATAL AND POST NATAL FITNESS AND MOTION FIT courses.
SHE IS THE ONLY BEYOND BARRE INSTRUCTOR IN INDIA
Beyond Barre is a cardio ballet Barre workout. Each body sculpting, fat burning , endurance building class incorporates Barre exercises to gain muscle control, increase flexibility and develop long lean and strong muscles. It optimizes the body to burn fat and increase agility and stability. Beyond Barre was started by Colleen Ketchum in New York, Colleen is also Sagarika’s mentor.
She conducts charity workshops on a regular basis for various NGO’s and their members.
She works in the media field and runs her startup ‘ Ayaana Media works ‘ along with her long time friend , Anjali .
Her future plans include to start a dance , fitness and movement centre .
Her other interests are Films ,music ,theatre,food and fitness.